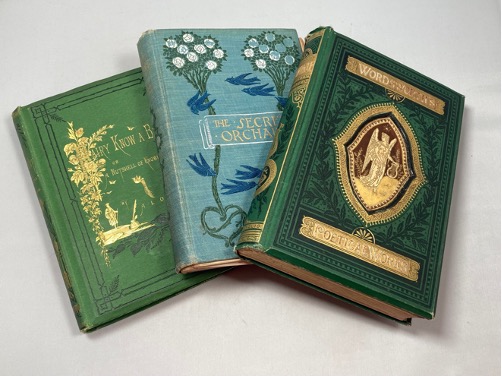 In Milly’s diary entries during her travels, she often speaks of the particular book she was reading during that voyage; it is evident that she was a very well-read individual. Above are three books from Eldon House’s extensive collection.

"Left the hotel at a quarter 8 and drove to the old Canard dock...The Lahn looks like a clean boat. Our cabins are good 195-198. Forward of the saloon and the stewards seem to be extra attentive. I fancy the voyage will be dull but ...[if we] are all comfortable we will be lucky... Sat on deck, read, the dinner is long and well cooked."

The Victorian Era saw much advancement in terms of boat travel: the invention of steam technology shortened journeys; more space for passengers and coal meant that more people could travel further and reach their destination without the need to refuel (Victorian Era, 2020). By the time the Harris family went on their World Tour in 1897, ships had become smaller, faster, and even more efficient. (Victorian Era, 2020). In September of 1897, the Harris family boarded the steamship the Empress of India. A little over a month later, they arrived at the first stop on their tour: Yokohama, Japan. Built in 1890, the Empress of India regularly travelled between Vancouver and various Eastern Asian and Southeast Asian countries until it was sold in 1914 (Vancouver Maritime Museum). Below is a segment from The Official Guide of the Railways and Steam Navigation Lines of the United States, Puerto Rico, Canada, Mexico and Cuba, originally published in 1897. The first entry shows the Empress leaving Vancouver and then subsequently arriving in Yokohama. Above is a quotation taken from Milly Harris’s diary, describing her first impressions of the Lahn, a ship she travelled on during her trip through Italy in 1900. Also below is an image describing this ship, in use from 1887 to 1904. 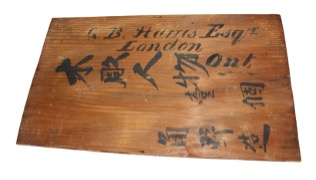 A portion of a crate the family had shipped home from Japan.